After finishing high school and having worked for several years in some small H-D shops, he then worked for more than ten years at one of the worlds largest aftermarket company’s for Harley-Davidson parts; Zodiac, based in The Netherlands, where his job was promotion manager.
That job took him all over Europe, where he also got to know many people, many of them became good friends. Lot’s of experience with tuned street bikes was gained being a Dyno operator at Zodiac for many years. After he quit his job at Zodiac, he worked for one of the biggest Harley-Davidson dealerships for a couple of years. Here’s where he learned all the ‘ins and outs’ of stock Harley-Davidson motorcycles, parts, accessories, and Screamin’Eagle tuning parts. His job was workshop- and warehouse manager at that dealership. After a few years he thought the time was ripe to turn his hobby into his work, so he left Harley-Davidson, took his camera and a pen and started his own company;
‘Madness Photography’

Famous people and company’s
In 1996 the big ‘break through’ came, when he was asked to not only photograph many famous people, but also write the editorial pieces about them and their bikes. Amongst them are many racers, like Werner ‘Kruse’ Sohm, Ton Pels, Rob van Geffen, Willem Been, Job Heezen, and many, many more! Also singers and rock bands have been photographed. To name but a few, Jasmin and the Blind Dogs, Joan Jett and the Black Hearts, Lemmy and his band Motörhead, and Dutch singer Rob de Nijs. (some of them even use his pic’s on their album covers) European Champion Body Painting; Arno Linder from Austria, Dutch TV personality Leo de Haas, Voice of Holland winner and tattoo artist Ben Saunders and many others have since been interviewed and photographed.
Someone special to name is his friend A.C. Farias, World Champion Stunt Riding. He was invited by “Berserk” to come to Holland, and was the top star at the Bigtwin event in Utrecht, in 1998. They became good friends, and A.C. is using his pic’s for promotion too.
The European department of Tsubaki Motorcycle Chains asked him to take the photo’s they needed for the new package. But other companies, like Harley-Davidson, Custom Chrome, Hardknock Motorcycles, Zodiac and Yamaha Motors, and many shops also use photo’s made by Madness Photography for advertising, promotion and their catalogues, some even worldwide! He also is the World Championship Custom Bike Builder Official Photographer since many years, many years in Sturgis, SD were the Finals of the World Championship were held for many year and recently in Essen, Germany. 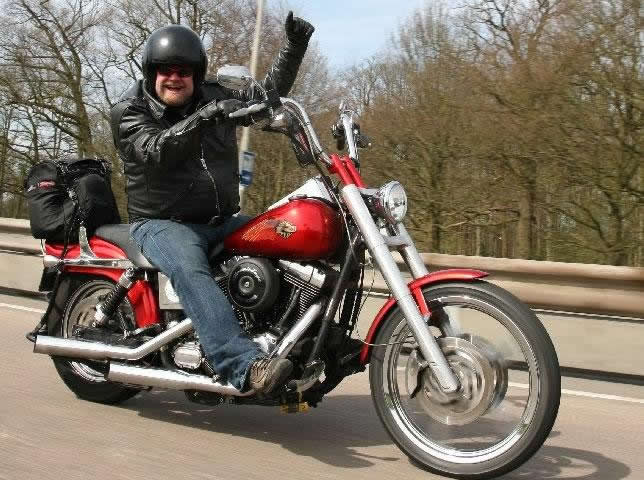